iOS has a very recognizable look and feel. You know, a bunch of home screens with grids of app icons or folders and a static dock at the bottom that houses the regularly used apps. By default, these are the Phone app, iMessage, Camer, and Safari.

We have seen a lot of jailbreak tweaks that try to get more functionality to the dock, instead of having it as just another grid of icons. Tweaks like Primo aim to bring common tasks like media control to the dock of your iPhone.

Today we look at yet another tweak that seeks to do something more or less similar to what Primo does. Multipla, also aims to bring more function to the dock in the form of widgets.

With Multipla, instead of the 4 apps on the default iOS dock, you get widgets (and the option of more apps) to your dock, all in a power-efficient, stable way. Multipla retains the stock iOS feel, while incorporating widgets featuring important information and controls.

The full feature-list of this jailbreak tweak is as follows:

-Choose widgets for your Dock

Multipla is not a free jailbreak tweak. If you want to get your hands on this tweak, you will need to fork out $1.99 on Chariz. Multipla comes with a Developer API that can be found here. This lets developers add their tweaks to Multipla and make them appear in their Dock.

The developer also adds that this tweak might not work very well with other dock-altering tweaks like Floating Dock. However, work is being done to that effect. Also, this tweak does not work on the iPad with this release. However, that might change in future releases.

Multipla has been updated to version 1.1.0. This build adds FloatingDock and iPad support while fixing some issues with the initial release. The following is the changelog for this release.

-Fix crash for some users

-Introduced an option to automatically cycle through widgets instead of performing refreshes (start auto swipe by performing a manual switch gesture, stop by doing a manual gesture again)

-Fixed possible issues with the auto-refresh option failing to update

-Music labels now scroll together even if they are different lengths

NOTE: We have these and many more jailbreak tweaks in our dedicated jailbreak section. 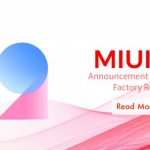 PSA: Xiaomi warns MIUI 12 update users not to factory reset units before May 18, recovery methods in the works