With the help of this two-point decimal system, you could actually see your device charging in real-time. However, this feature was later removed from the devices that feature 20W and 30W chargers, due to some display issues and it was only available for phones with 50W chargers.

This two-point decimal charging system was a pretty nice feature and users were waiting when Realme will push this feature back for the compatible devices.

And if we go by recent announcement on the Realme community website, the decimal point animation has been brought back for the Realme X with the April security patchset.

Matter of fact, the update also brings up a swipe gesture indicator to follow screen rotation, optimizes the audio effect, fixes MPG format video thumbnail, and some other fixes for the Realme X.

Notably, the update is currently live for the users of Realme X in China and it arrives with version number C.08. Below is the complete changelog for your reference:

● Optimize the audio effect of the three-party application

If you are in China and own a Realme X, then you can enjoy the latest security patchset and the decimal charging system on your phone with this new update, that is arriving via OTA in batches.

Users can head over to Settings>>Software Updates and check for the updates manually on their phones if they have not received the update notification.

Let us know in the comments below, what are your thoughts about the decimal charging system, and do you think this feature should be made available for more phones in the future?? 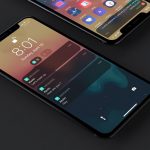