One Piece 977 spoilers on Reddit reveals Kaido has a son

Yes, this is the first time we are hearing about Kaido having a son. Never in any previous chapter was Kaido hinted to having a son. Some fans on Reddit even argue as to the reason why this son of Kaido was never mentioned. 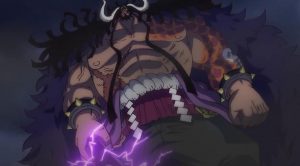 According to One Piece 977 spoilers on Reddit, Kaido’s son would not show his face in the banquet held at Onigashima. But from the initial conversation Kaido had with someone, it seems like having a son is not a secret. However, it seems pretty obvious that Kaido does not have a very good relationship with him.

This provokes the question: does this son have anything to do with what Big Mom said Kaido owes her from a long time ago? It is almost too difficult to think that Kaid and Big Mom would have that kind of relationship. But we cannot disregard the fact that the two of them were at a time on the same crew.

Anyway, the origin of Kaido’s son may be revealed later in the story. He may even prove to be another hindrance to the Straw hat’s mission.

In the cover story, Lola and Chiffon are finally reunited. As it turns out, both of them were in Dressrossa after all.

Also, X-Drake and the rest of the Flying Six headliners arrive. They will most probably be the third strongest wave of enemies the alliance will face before reaching Kaido. I wonder, however, what Drake will do. The instruction from Akainu is not to meddle with the affairs of Wano.