Animal Crossing New Horizons Bunny Day event is currently live in the game & it will stay live until April 12. As it only comes once a year, it’s a good time to hunt down eggs & craft special items.

Cut to now, Animal Crossing New Horizons servers went into maintenance today for a new update. Well, the new patch is now available for players. It has fixed issues relating to the relocation of animals. The new update for the game has arrived with version 1.1.2. According to early reports, the latest patch has also fixed the bug with the campers & land. Nintendo has also shared official patch notes for the update which you can check below. After the renewal, the land that has been closed will return to uncontracted and you will be able to relocate new animals.

* We are very sorry, but animals that were scheduled to migrate at the time of the malfunction will not return to the original island and will not be migrated this time. After the update, if the island has developed to a certain state (if the raccoon store is under construction or completed), a specific event will occur during the broadcast on the island in the next play of the islander representative, Will progress.

After updating, you can apply for relocation again. But after downloading this update, some players are unable to connect with the game & getting error codes including 2219-3997. Many have tried to close & restart the game, but it is not working for them. It seems like ACNH is having issues with its servers. Have a look at a few complaints down below. 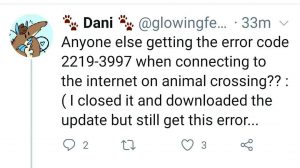 There is no official response from Nintendo yet, but we are following this issue closely. We will update you with more information or fix, whenever it arrives. So, stay tuned with us for any upcoming Animal Crossing New Horizons news. 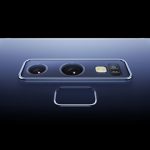