A new update for Fortnite is about to release soon. The latest patch is coming with version 12.20. Many new items & skins are expected to arrive including Helicopters & Scoped AR. Players are very excited regarding the addition of a new vehicle.

Epic Games took the route of Twitter to confirm the timings of the update v12.20. Downtime for the new patch will begin at 4 am ET (0800 UTC). Along with the new content, it will also bring bug fixes to resolve the ongoing issues. We have listed below, all the speculated content which is expected to arrive in this update. Leaks regarding Helicopters have been floating around from quite some time. Also, helipads have been added to several named locations of the map. According to data mined leaks, Helicopter will only fit one person & have 1500 HP. However, it won’t feature any weapons. 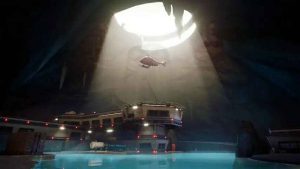 Well, Epic Games has to ramp up its updates with exciting content as Call of Duty Warzone is creating new records in the Battle Royale arena. The addition of Helicopters would be a nice fit to counter the excitement of Warzone.

Fortnite update v12.20 is also expected to add Scoped Assault Rifle to the game. The official description of this weapon reads as follows: Precision Burst: A burst-fire tactical assault rifle featuring a scope. Good damage and impact at long range, but consumes a lot of ammunition. In addition to this, Fortnite update 12.20 is also expected to fix several bugs which have been listed on the Fortnite Community Issues Trello board. The complete list of issues which will be addressed in the upcoming update are mentioned below.