When it comes to best free-to-play fighting games on Steam, Brawlhalla comes in the top five list. Brawlhalla has been developed by Blue Mammoth Games & is available on all the major platforms, including PS4, Xbox One, Nintendo Switch, and Windows.

The game is somewhat similar to Super Smash Bros., as players are required to knock out their opponents off the stage. The game can be enjoyed both offline & online. The game features several modes which include the following: Free-For-All, 1v1 Strikeout, Experimental 1v1, and a different featured mode every week. Brawlhalla also supports cross-play which allows players on PC, Nintendo Switch, PlayStation 4, and Xbox One to battle against each other in online ranked play and to create custom lobbies which a player on any platform can join. The game also features weapons, which fall from the sky randomly, but players can only use 2 weapons. Different types of weapons include the following : blasters, katars, rocket lances, swords, spears, cannons, axes, gauntlets, hammers, bows, scythes, and orbs. Cut to now, a new patch update has gone live for the game & it has brought many enhancements to the game. The latest version of the game has arrived with patch 3.58. The new update has also brought a new legend to the game called ONYX, THE GARGOYLE. 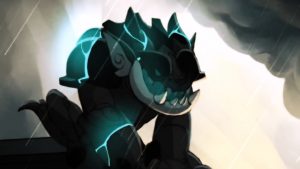 The powerful Guardian and Protector of Castle Batavia, Onyx has been offered a place in Valhalla and now defends it ruthlessly with her Cannon and Gauntlets. Onyx is a new Legend and has joined the roster permanently. Brawlhaven has also received an update to its map and platform art. Brawlhalla is also celebrating
the Luck o’ the Brawl Event with a new Skin, bonus login Gold on March 17th! For those in the pursuit for Glory, the new Ranked Season 16 will start on April 2nd. You can check the complete details regarding the new patch down below. The Experimental Cannon kit has been graduated into the live game! The new Neutral Light, Side Light, and Down Air are now part of the base Cannon kit, providing their extra priority and explosive blasts to all Cannon Legends. See the Balance section for the final list of adjustments made to these new attacks. The new moves are as follows from left to right: Down Air, Side Light, Neutral Light.

We’ve updated the background map and platform art of Brawlhaven! Themed after the mythical location of Dragonport, the art features a landscape of floating rocks and a viking ship flying in the blue skies.

Brawl of the Week – Temple Climb

Walk the line between myths and truth like Lara Croft! Survive the treacherous climb through this 3 minute, 4 player free-for-all match. Beware! The temple is filled with traps, so make your own luck by activating the pressure plates to turn them on your opponents. The player with the highest score wins!