Its raining updates for Samsung, OnePlus, and Xiaomi devices. Regular Samsung phones as well as the carrier variants, are getting the March 2020 updates while Xiaomi and OnePlus are grabbing February 2020 security updates.

Samsung has become a name to reckon with when it comes to pushing updates. Back in December 2019, Samsung has beaten all other OEMs even Google in terms of pushing the January 2020 security update and continued its dominance with the February 2020 patchset as well.

In fact, Samsung has beaten Google again in pushing March 2020 security update as recently, we have reported Galaxy M30s grabbing the March patchset.

Now let’s quickly take a look at the updates received on each of the devices one by one:

To begin with, according to one of the Redditors, Samsung Galaxy S10 is getting the March 2020 update with the software update version BTB3. Notably, it is currently live for users in Switzerland and is expected to extend to other regions soon.

It seems that the update is purely incremental in nature and users can check for the latest update notification by heading to Settings>>Software update>>Download and install.

Both the Verizon variants of the Galaxy S20+ 5G and S20 Ultra 5G are getting their first carrier update. It is purely incremental in nature and just tags along the March 2020 security patch.

The update arrives with version ATBN for the Galaxy S20+ 5G and S20 Ultra 5G. Below is the changelog for the update. Note that it is similar for both the devices:

What’s changing:
– The current software update improves the performance of your device. 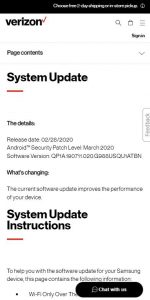 Grabbing the 8th carrier update, Verizon Galaxy Tab A (8.0) is getting the February 2020 update. Arriving with the version number BTB2, this update improves the performance of the device as well.

Another major US carrier, AT&T, has pushed February 2020 update for the Galaxy Note 9 variant. According to one of the Redditors, it is hitting the units with version number DTB1 and it sizes around 168 MB.

While users are waiting for the Android 10 update, the Chinese OEM, Xiaomi has updated its Mi A1 smartphone with February 2020 security update. It is 76 MB in size and is hitting the units via OTA. US carrier network, T-Mobile has rolled out the February 2020 patchset for two OnePlus handsets, namely, OnePlus 6T and 7 Pro.