Many Android smartphones today no longer ship with an LED notification light to let you know there’s a new WhatsApp message, an important email has arrived or maybe you missed a call while you were away from the phone.

Long-time smartphone users will at some point miss the LED notification. I miss it too, but that’s the price we pay for demanding for expansive display screens on reasonably compact devices with no bezels. Matter of fact, the lack of bezels on smartphones today is the major reason the LED notification light is gone. The feature was housed by the top bezel, which is no longer a thing on many modern-day smartphones.

For those like me who have had a hard time readjusting to life without an LED notification light, there are a bunch of handy solutions out there to turn to. My personal (favorite) solution to this problem is an app called NotifyBuddy – AMOLED Notification Light. It’s a free-to-download app in the Play Store that lets you turn your phone’s screen into a notification light. No, not the entire screen, but a small section in the top corner.

You can customize the appearance of the blinking animation to what you’d imagine your LED notification light to be like, including using icons of various apps. But unlocking the full power of the app requires $2.

Realme, whose phones also miss out on the LED notification light, wants you to keep your $2 thanks to a feature known as Screen Light Effect. The feature is supposed to be part of the latest Realme UI update, lighting up the edge of your phone’s screen whenever you have a missed call or message.

But for some reason, the Realme X Realme UI update released earlier today doesn’t include the Screen Light Effect feature. When asked about it, Realme India support responded by saying the team is working on the feature to be included in a future OTA update. 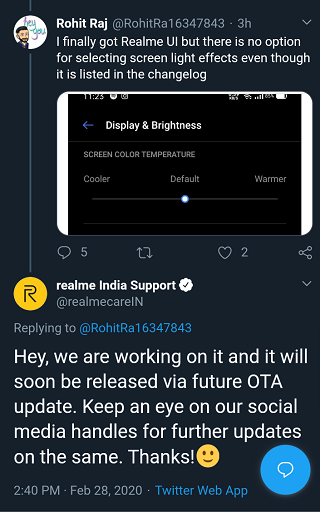 As you can see from the screengrab above, there is no mention of the date this feature will be pushed, so we wait.