Apple has been granted a new US Patent, regarding a crown but static and with incorporated optical sensor which could be used for gesture recognition. It seems like the famous rotating crown in Apple Watch is being converted into a flat digital crown.

Later in the article various possible functions of this digital crown are detailed. Below is the Apple Watch (series 5) picture along with the iconic rotating crown.

This digital crown will be flat and this will improve durability of Apple Watch in the long term. Also, it will free up precious space for other components. Visual patent diagrams are shown below for flat digital crown: 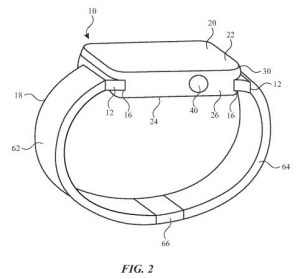 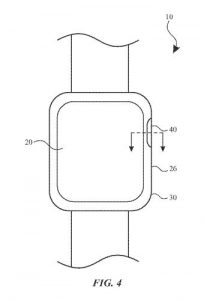 New optical sensors and mechanics in the digital crown may add lots of new features and functionalities. It may be able to sense motion, force, touch, light and pressure etc.

Some of the sensors which can be included are a temperature sensor, a humidity sensor, a magnet, an accelerometer, a gyroscope, and a photodetector etc.

Moreover, another US Patent provides a solution for uncomfortable tight wrist bands.

The solution is that a band which is capable of maintaining a constant tension around the wrist. It means that the band can expand or contract a little, around the wrist itself. Thus, the watch band will neither be too tight nor be too loose. Visual Diagram of patent is shown below: It is further explained that such a band is not only beneficial with respect to the feel or comfort but it could also optimize the functionality of any sensors placed in the watch.

Companies patent a lot of ideas and technologies to protect their inventions, but it is not a guarantee that each patent will materialize into a product. Lets see, if any of the above mentioned patents, can find its way into the Apple Watch Series 6. 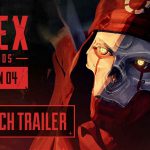