Even though Apple couldn’t defy Android in the popularity, they have managed to build a cult around iPhone. Despite several OEM-imposed restrictions, there are millions of diehard fans for the so-called Cupertino ecosystem.

However, the second half of 2019 wasn’t pleasant. The latest release of their operating system, iOS 13, piled up negative feedbacks due to various bugs like Personal Hotspot connection glitch, MP3 attachment issue on Gmail, etc.

They are trying to minimise the bugs with each incremental update. Moreover, a beta program is present for those who wants to have new features in exchange of tolerating problems that won’t possibly escalate to the stable release.

Today, a post on iOS beta subreddit has hooked our eyes. Going by the fact given there, you can increase the cellular speed on iPhone by simply disabling Cell Network Search option. More than a dozen comments under the entry strengthens this speculation. Though most of the people agreed the positive effect of turning off Cell Network Search on the cellular speed, we could find a few who stated the opposite. In the image given below, bottom result has it turned on, and upper, turned off. 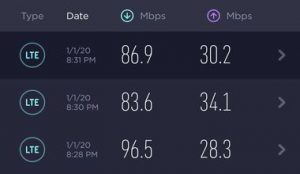 Wondering what exactly Cell Network Search option (you can find it by following Settings>> Location services>> System services) does? Let me get you an answer straight from Apple’s discussion forum.

Cell Network Search is a location based service that sends your location information, and the tower ids of the network towers within range of (and thus detected by) your phone. It is used by Apple marketing (and whomever they choose to sell/share the database with) to determine patterns of cell usage, tower congestion and so on.
(Source)

If you take this answer into consideration, it’s possible to get a bump in cellular speed on turning off Cell Network Search setting. But still, those who got an adverse impact still raise a question mark. Do you have an iPhone? What’s your case? Do let us know through comments.

Note:- Have a look at our Apple section for similar stories.

Next article How to convert any DVD to MP4, AVI or other video formats in 5 minutes