Realme, like its parent company OPPO, is lining up a series of ColorOS 7 updates aimed at bringing the latest Android 10 to its devices. So far, a handful is already into the beta testing stage and more should get the nod this coming year.

For those who aren’t into beta testing software, Realme will keep rolling out monthly software updates with new features, bug fixes and optimizations in readiness for the arrival of ColorOS 7 stable.

A few days ago, the Realme X2 Pro and Realme 5 Pro bagged their December security patches, but this was in China. Today, the same update has arrived on the latter device in India, tagging along plenty of improvements.

The new OTA is arriving as software version RMX1971EX_11_A.15 and besides the new security patch, Realme 5 Pro owners also get a bunch of new features like the ability to click the blank area to go back to the launcher on recent task interface, flash on call feature, and so on.

Below is the summarized changelog:

Instead of waiting for the OTA, we have the link to download the new firmware for manual installation right below:

As far as the Realme X Lite is concerned, the December update is rolling out in China. Outside China, this very device is known as Realme 3 Pro and ICYMI, it already picked up its December security update.

Besides the updated patch, the Realme X Lite is also receiving some new functions like dark mode quick switch in the notifications area, Realme community app, and more.

Below is the summarized changelog for update version RMX1851_11.A.10.

It’s worth noting that the changelog above has been translated from Chinese, so some things may be a bit off.

Like several other Chinese vendors, Realme phones display recommended content (ads) through system apps, but the company has now elected to make the experience less obnoxious by allowing users to disable content recommendations.

You can now stop ads from popping up on your Realme phone by heading to Settings >Additional Settings > Content Recommendation. 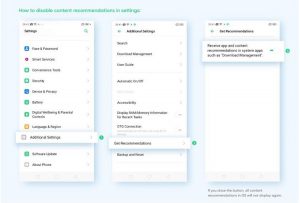 How to disable ads in Realme phones (Click/Tap to view)