Looks like HSBC users in the UK are having issues accessing the bank’s app. Reports are pouring in social media that the HSBC app is down, with some complainants even reporting problems with online banking.

@HSBC_UK is your app service down?

@HSBC_UK any issues with the mobile app? Unable to logon on iOS

@HSBC_UK I think your app is broken, error message…

For it’s part, the bank hasn’t said anything, not at least through its social media channels. But we’re keeping a close watch, and will continuously update this story with more information.

Fresh reports suggest the app is back up now:

Yes apps are revoked. We will fix them as soon as possible, sorry for the delay

Apps have been fixed! Enjoy!🔥
Delete old apps and reinstall with the new!

I uninstalled tweak box and now it won’t work? What now? @TweakboxSupport @TweakBoxApp

Wasssupp with the apps again

Is it not working for anyone else right now?

@TweakBoxApp My store isn’t working and it won’t let me download any apps. Like it would download but pop up as a blank app and also won’t even let me confirm source/Profile. Can you help?

it got revoked again😕

We’re keeping a close watch on the situation, and will update this section more information as soon as the problem gets fixed or something news worthy comes to our notice. Meanwhile, share your Tweakbox or TuTuApp experience with us.

Tweakbox has confirmed apps have been revoked again:

Revoked. Again. God. For those of you who are new, its not something we do on our end. It happens and its inevitable. Sucks.

Even AppValley has confirmed the app revoked issue, saying they are trying to fix it asap:

Users of the Barclays mobile banking app in the UK are now facing issues. Here are some reports:

@Barclays hi trying to use the mobile banking app but getting unable to connect, are you having trouble?

@BarclaysUKHelp is the Barclays banking app down right now or something , can get onto Pingit but not the bankin app itself?!

Hi @BarclaysUKHelp, I can see by my endovenous and Twitter chatter the Barclays Banking App is down – might be a good idea to change the status update on your site to state it's down instead of putting your fingers in your ears?

Even users of TSB are reporting similar problems, which the bank has officially confirmed:

I’m sorry to your tweets. We're aware that some customers are experiencing intermittent issues with their Internet Banking and mobile app. We're working to solve this as soon as possible and we apologise for any inconvenience caused. Julia

We are keeping a close tab on the situation, and will update the story more newsworthy information soon. So keep checking back.

The bank has acknowledged the outage:

We are aware of an issue at the moment with the Barclays mobile banking app and are looking into whether this is also affecting the mybarclayacrd app. Hopefully this will be resolved very soon 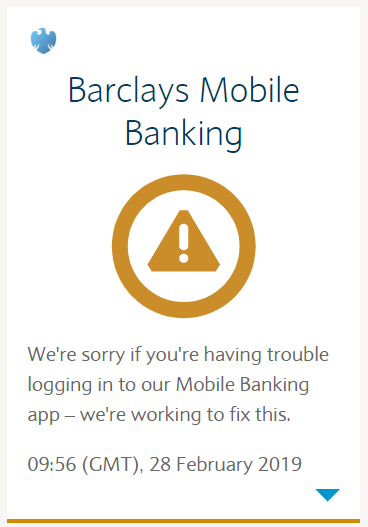 Even Pingit is down currently: Patreon down for maintenance

Patreon, a popular platform aimed at making it easy for artists and creators to get paid, is currently down right now. If you try accessing the official Patreon site, you’ll see a ‘maintenance’ notification.

Sadly, no info on when this maintenance period will be over. Meanwhile, users are taking to social media over this outage:

Oh hey look cool patreon is down. This is getting old.

It’s now coming to light that the Starbucks app is currently acting glitchy for users.

@Starbucks tough day for everyone, or is just my phone/app that doesn’t want be caffeinated. #paidwithsparechange

Jesus Christ… why is the @Starbucks app shitting the bed this morning?

@Starbucks Your app is not working this morning. pic.twitter.com/cndn6PSEIn

We are looking for more info, including any official word from the company. Will update the story soon. So keep checking back.

Here’s what all the game developer has said about this bug so far:

At the time of thes week’s update (11:30 GMT – 28/02/2019), a bug entered the game whereby a Twisted bow spawn was added close to the Farming Guild in Kebos. As a result, an unknown number (we are working on this) of Twisted bows entered the game unfairly. Very shortly after (before the hour was out), this was hotfixed to no longer have an option to be picked up or Telegrabbed

13:35: The game has been turned off while we examine our options and work with various teams to decide what happens next. Rolling back the game is one such option we are considering.

13:56: We can confirm that the game will be rolled back. You can expect the game to be reset and come back online as it was just before the update at 11:30am GMT this morning. Any changes made to your account between then and now will be reverted and we sincerely apologise for the inconvenience. We estimate that it will take 4-6 hours to complete the rollback

HSBC mobile banking is down and not working as of writing this. What’s good is the company has acknowledged this issue via their social media handle (@HSBC_UK), saying:

Morning! Mobile and Online Banking are still down, Fairylight. Sorry for the troubles, but the IT Team are working very hard to provide a fix ASAP