Since its announcement at BlizzCon 2018, Warcraft 3: Reforged became one of the most anticipated PC games. Luckily, Blizzard Entertainment has recently confirmed the Warcraft 3: Reforged release date, and it’s January 28, 2020. So those of you who’ve been waiting, save the date!

Taking a sharp turn from what Blizzard said earlier – where they promised the game would be out by the end of 2019 – the company recently explained the delay saying:

Though we’ve been working hard to get Reforged in your hands before the end of the year, as we started approaching the finish line, we felt we’d need a little extra development time for finishing touches. As always, our goal is to honor the high standards you hold us to. This upcoming real-time strategy title from Blizzard is a recreation of the prevalent Warcraft III: Reign of Chaos coupled with expansion from Warcraft III: The Frozen Throne. This time around, Blizzard has created this title from the ground-up.

As a result, it offers drastic improvements in the graphics department.

Apart from the original voice acting, this upcoming title doesn’t have many similarities with its predecessors. Blizzard has completely redone the characters, structures, environments, and animations of this game. The single-player mode of this game will consist of around 60 missions that will be spread across seven campaigns.

Heroes of the Storm

The standard version of this game can be purchased for $29.99, while the Spoils of War edition costs $39.99. 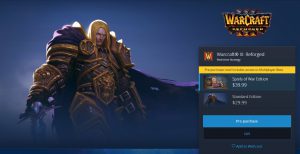 Presently, you can pre-purchase this game from battle.net. Blizzard is providing access to the ongoing multiplayer beta of this game to anyone who pre-purchases it.

Note: You can check out our dedicated Gaming section for reading more similar stories.