One of the reasons some people have a problem with non-Google Pixel or non-Android One phones for that matter is the duplicate apps some of these devices come with on top of what Google offers.

In addition to the Google apps pre-installed on Android devices, among them the Play Store, Search, Chrome, Google Drive, Gmail, Maps, Google Play Music, Photos, and YouTube, Samsung, for instance, has a bunch of its own with duplicate roles and others with unique roles as well.

Today, the Korean company is rolling out new updates to three of these apps namely Calendar, Galaxy Wearable, and Galaxy Store. The latter, as you may have guessed, poses as Samsung’s take on the Play Store, but with a limited set of apps.

In the latest update to version 4.5.10.5, the Galaxy Store has finally picked up the support for Dark Mode. Sure, the new One UI 2.0 update based on Android 10 has a system-wide dark mode, but app developers have also equipped individual apps with this feature.

The Galaxy Store update can be summoned via the About Galaxy Store section in the app store settings. If it hasn’t hit your device, you can grab the APK version from the APK Mirror and install it manually right away.

Samsung Calendar, on the other hand, is picking up an update with version 10.6.00.7 and weighs in at 20.5MB. Part of the changes included is the Note 10’s write on calendar feature alongside a write on calendar shortcut in Air command settings. 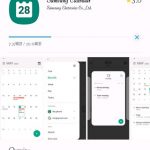 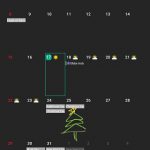 For those with the Galaxy Wearable app, the latest update is arriving as version 2.2.28.19120361 and weighs in at 5.83MB. The update fixes a runtime exception issue and enhances the stability of the app.

If the update hasn’t hit your Samsung phone, the APK can be downloaded from the APK Mirror and installed manually.