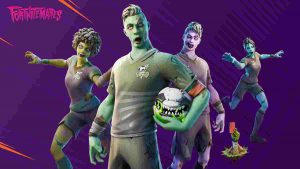 Grab the new Zombified Emote in the Item Shop now!

Fortnitemares 2019 is expected to last for two weeks. Players may also see possible map changes. Well, apart from that, a prominent data miner and Fortnite leaker, @Lucas7yoshi, has revealed some new Fortnitemares 2019 zombie skins. Have a look at the new skins down below. 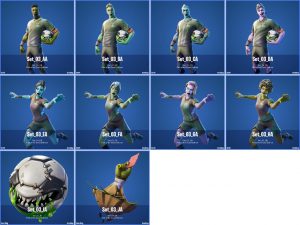 Apart from the above-mentioned skins, @HYPEX also revealed the names of some other Halloween skins earlier, which may become part of the upcoming Fortnite Halloween event. @HYPEX is one of the most popular Fortnite leakers, and his leaks have gone accurate many times, but that does not mean it will necessarily be true. We should only take these leaks with a grain of salt and wait for the official announcement. Fortnite Season 11 has also added some new features and elements to the game. In Fortnite, Season 11 players can carry their downed teammates, and they can also heal them with the help of a new weapon called Bandage Bazooka.

Fortnite Chapter 2 also features a new XP and battle leveling up system. The new season has also added motorboats to the game, and with the help of this new vehicle, players can traverse quickly across the map. So overall Fortnite Chapter 2 is quite refreshing for Fortnite players.