A new update for PUBG Mobile is going live on October 16. The latest update 0.15.0 is bringing in a lot of new features and enhancements to the game. PUBG Mobile servers will go into maintenance for the update from 00:00 to 07:00(UTC) on October 15, 2019. PUBG Mobile update has added new mechanics to the gameplay. Players will now be able to leap in mid-air to reach previously inaccessible places with the help of ‘Ledge Grab’. The game is also bringing in new vehicles to the game including BRDM-2 and helicopters. With the addition of these new vehicles, players will be able to traverse across the map pretty fast. Players will also be able to use fuel drums as a trap as they are now explodable in the game. The latest update to the game has also fine-tuned some weapons including M16A4, Vector, UMP45, and MK47Mutant. One of the popular weapon Desert Eagle has also been added to the game. PUBG Mobile update 0.15.0 has enhanced the performance of the game to a much larger extent, as the game now runs smoother and consumes less power. It means it is less likely to cause the heating of the device to high temperature. The new update also comes in with a lot of graphics improvement. While opening the scope, errors in the movement have been reduced by tuning of the touch controls. PUBG Mobile update 0.15.0 also brings in Graffiti to the game. 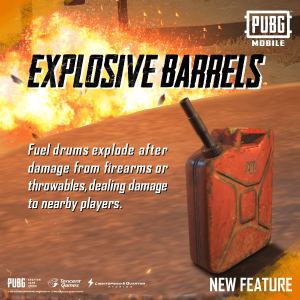 Pick up dead teammates’ ID Cards and revive them at the Communication Tower!

Find helicopters and take them into battle!

– Modified skybox, colors and background objects. “”Halloweenized”” monsters.
– Added a hostile human faction in abandoned factories and strongholds. Defeat them to get better rewards.
– Killing zombies grants special bio-warfare equipment that is effective against zombies and other players.

– Climb between buildings and containers to reach previously inaccessible places.
– Tap jump, then jump again at the right timing in midair.

When hit by bullets or throwables, fuel drums explode and damage nearby players. Available on all maps.

– Resilient and capable of traversing water. Equipped with bulletproof tires.
– Reduces damage taken.
– Can be called in only with the Flare Gun. Replaces Armored UAZ.