Fortnite Season 10 has finally concluded grandly and magnificently. Millions of players tuned in to Twitch & YouTube to watch the event live. Well, Epic Games has sort of deleted Fortnite with the conclusion of the ‘End’ event, and it also hints us that there will be a new map for the upcoming Fortnite Season 11.

Epic Games has a habit of starting any new season with an interesting in-game event. At the End event of Fortnite Season 10, we witnessed a missile that took off from Dusty Depot & and crashed into the sky, creating multiple rift zones.

And from these rift zones, rockets came out which started colliding with various things. Then all rockets crashed together into the meteor & which led to its sinking & disappearance from the map. Have a look at the event video down below.

Then a meteor from the rift zone destroyed the zero point at Loot Lake and created a black hole that absorbed everything & destroyed Fortnite’s map. Even players who were in the lobby area were pulled to Blackhole. Have a look at the video below.

Now leaks from data miners are suggesting that Fortnite’s new chapter or Season 11 will begin on Thursday. Currently, Fortnite’s servers are down & Epic Games has deleted all tweets from Fortnite’s official Twitter handle. 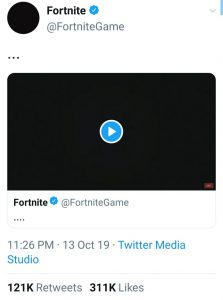 Fortnite Season 10 conclusion event revealed four numbers in the black hole, which led fans to think about its possible connection to the visitor tapes. Well, after the conclusion of the ‘End’ event, numerous numbers have been revealed, which is helping to solve the story of the mysterious black hole. A popular Fortnite Leaker and data miner, Thooming has posted a list of numbers and matched them to the visitor tapes and has come up with a message which says, “I WAS NOT ALONE. OTHERS ARE OUTSIDE THE LOOP THIS WAS NOT CALCULATED. THE ZERO POINT IS NOW INEVITABLE.” Have a look at his tweet down below. According to newly leaked and data mined data from Lucas7yoshi suggests that Fortnite’s black hole event will end on Thursday at 4 am EST, but he doubts that this event Epic Games will make players wait for four days. He has decoded this info from Fortnite.com. Have a look at his tweet below. However, his earlier tweet suggests that the ‘End event’ will end on Tuesday at 6 am EST. Well, we should take this leak and information with a grain of salt, and whenever any update arrives, we will update this column. Previous article Grindr down and not working for many