Security updates have become quite a thing and the users have now become more knowledgeable regarding it. OEMs are trying their best in order to provide the latest security updates as they fix several vulnerabilities.

Sony and Samsung are big names in consumer electronics and often we see neck-to-neck competition between both the electronic giants. But, when it comes to smartphones, Samsung is ahead by Sony by a huge margin.

Be it bringing in innovative designs and features to the devices or be it software updates, Sony is just nowhere in the picture. On the other hand, Samsung, which has faced severe flak in the past for pushing slow updates.

However, Samsung has tried to push out updates for its newer and older devices. But, Sony smartphones now seems to lose its charm, it once had.

In a recent development, both Samsung and Sony have pushed out new security updates for its devices. Reportedly, Sony has pushed the September patch for the Sony Xperia XZ2 range of smartphones and is available for download.

Moreover, Samsung has started rolling the October patch for the Galaxy J6 Plus smartphone. Let us take a look at both the OEMs updates, one by one:

Previously, Sony rolled out the August update for the Xperia XZ2 smartphones on time in August. Below is the screenshot of the update:

You can also download the corresponding kernel source package for the Xperia XZ2 series of smartphones from the download section below:

Meanwhile, Samsung has also pushed the October security patch for the Samsung Galaxy J6 Plus smartphone which was launched in 2018. The update does not bring in any new feature for the Galaxy J6 Plus and is just an incremental security update. Note that the update is rolled out via OTA in batches and will take some time to reach your device.

However, you can check for the update by heading to Settings>>Software Update>>Download and Install and if any notification is available for the update, tap on it to install. 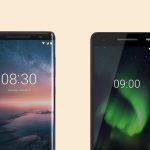