Samsung has been on a roll this year, as the company has literally tried to improve its image of a smartphone brand that takes too long for pushing out updates.

A lot of newer as well older smartphones have been served with either the August or the September 2019 security update. Moreover, looking at the Samsung Android Update Cycle, we get a clear picture of which devices will get monthly or quarterly updates from the OEM.

This might be one of the reasons for the growth of the company globally as according to a report by Canalys, Samsung shipped 76.9 million units in Q2 2019 which is up by 6% annually. 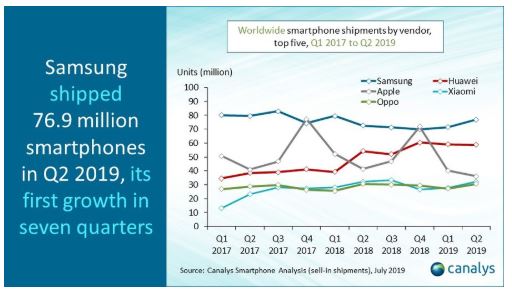 Moreover, the other reason for its growth is due to the fact that the company has discontinued the Galaxy J-series and brought in the Galaxy A-series into new price bands competitive to other players like Xiaomi, Realme, etc.

In a recent development, Samsung has rolled out the August security update for the Galaxy A6 smartphone that was launched in 2018. Talking about the update, it carries the build number A600FNXXU4BSH2 and brings in security patch level 2019-08-01 and is based on the Android 9 Pie.

For a refresher, the Galaxy A6 is powered by the Exynos 7870 processor which is paired with 3/4GB of RAM along with 32/64GB of internal storage. It sports a single 16MP camera at the front and the rear. Moreover, you get a rear-mounted fingerprint scanner along with a 3000 mAh battery. In the display department, it has a 5.6-inch AMOLED panel.

More importantly, this update is available in U.K, Bulgaria, Uzbekistan and Caucasus countries, and is not available for users in the European region for the Galaxy A6+ model. Note that the Galaxy A6 is placed under the Quarterly Security Updates plan of Samsung.

Note that the update is rolled out via OTA in batches and may take some time in reaching all of the devices. However, you can check out for the update notification by heading to Settings>>Software Update>>Download and Install. If the notification is available, you can tap on it to download.