OnePlus 7 Pro was launched in May 2019, and in over a period of four months the company announced OnePlus 7T (in September). While the later will be officially releasing in a couple of weeks we have now come across leaks that suggest the OEM might be working on OnePlus 8 already.

If the leaks are to be believed, the design of the phone suggests a punch hole display with curved edges. In that case, this could also be the first OnePlus phone to have a curved display around the edges. As can be seen in the image above, the phone seems to embrace a vertically mounted triple rear camera setup instead of a circular housing for the camera module like OnePlus 7T (that will be released in a couple of weeks), quite like OnePlus 7/7Pro.

The leak also suggest that OnePlus 8 may support wireless charging. This is quite interesting given the fact that CEO OnePlus Pete Lau at MWC 2019 said that he thinks in a age of fast charging, wireless charging is far inferior as it charges the device slow.

Does that mean, OnePlus has already developed wireless fast charging or is working on it? Don’t be surprised if they do, because Xiaomi recently launched Mi 9 Pro 5G with 30 watts wireless charging. So it is possible, but nothing is official at the moment. The phone is rumored of dimensions 160.2mm x 72.9mm x 8.1mm (9.3mm including rear camera bump) approximately. Another noticeable improvement is the loudspeaker, which seems to have a port rather than grille. 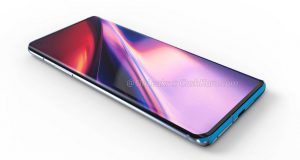 The leaks are not based on factory CAD files, rather it is based on detailed Schematics from a company insider. So, we cannot consider this leaks as the finalized design of the OnePlus 8. We can say the possible OnePlus 8?

Yes, but be warned there could be some/many changes incorporated on the final OnePlus 8 render.