Apex Legends Season 3 started with a big bang when the game developers introduced an all new Battle Pass and the rewards for the Season. With new map, a new legend and a new weapon players are excited to play the game and win their rewards.

But reports have been coming in which point out a major bug in the battle pass for this new Season. The bug is preventing the players to unlock the content they have been grinding for. The Battle Pass has 100 tiers and bonus tiers to unlock ton of content by playing and earning XP from challenges.

But there’s a bug in the system that has stopped players from ranking up the battle pass. The bug was spotted by the players just after the update went live. Given the fact that this Season, reaching 100 level of Battle Pass will be much harder given the progression is so slow, it is all the more frustrating to see not ranking up even when should have.

There have been a ton of complaints regarding this bug. A reddit user by the name of connor_d5 explained the issue. They said “whenever I complete a challenge, it adds the XP to my counter, but then the next time I come back, it’s reset at the original amount I had before the challenge was completed. It’s very frustrating and making my battle pass progression a nightmare”.

So, in short, even when the players are playing the matches and earning XP, the XP is given to them at the end of the game but after coming back to the lobby in the Battle Pass section, the XP doesn’t reflect and hence players aren’t able to rank up or unlock the items either.

Another Reddit user uploaded picture of the issue and told that they have been stuck at level 7 even when the game ranks him up to level 8 at the end of the match. Take a look at the pictures below – 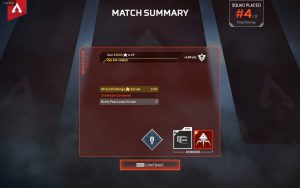 At the end of the match After going to Battle Pass section

Both Reddit and Twitter of Apex Legends have been flooded with similar complaints irrespective of the platform on which they are playing. Up until now, there has been no word by Respawn or any of the devs. But follow us here for more updates for the bug.

Are you having the similar bug in Apex Legends? Let us know your experience in the comment section below!