Asus ZenFone 4 owners should be quite familiar with what has been going on regarding ZenFone 4 Android Pie update. At first, the company published Android Pie beta update for the device, halted the rollout, and later resumed it without changes to the firmware version.

However, the re-released firmware still left out those using the JP SKU from Japan, but this doesn’t mean they won’t get the stable update to Pie when it arrives God knows when.

While users of the standard ZenFone 4 might be sweating over when their Pie update will arrive, those using other ZenFone 4 variants like ZenFone 4 Selfie/Selfie Pro and ZenFone 4 Max/Max Pro are still stuck on if they’ll actually receive this update.

Until ZenFone 4 Selfie Pro users learn their Android Pie fate, Asus has a new software update rolling out to the 2017 handset as version V71.50.395.99, a target for the device’s model number ZD552KL.

The changelog doesn’t have much other than the latest September 2019 security patch alongside the usual bug fixes and stability improvements, up from the previous July security update that arrived at the end of July as version 71.50.395.89.

Also on the receiving end of a new software update is the aforementioned standard ZenFone 4 (ZE554KL). The changelog isn’t quite as clear as the ZenFone 4 Selfie Pro’s, but it does confirm a new Android security patch is included in the new update.

The last time the ZenFone 4 received a software update was in late July, which included the July security patches. Given that October is almost here, we’d like to believe the incoming ZE554KL update has September security patches.

The ZenFone 4 update is rolling out as version 15.0610.1909.39 and is heading to the WW SKU as an OTA update, just like its Selfie Pro counterpart. Granted, it may take several days before all units receive the download notification, so stay patient.

Asus has yet to update the download center with these ROMs, so the only way to get the new updates is over the air. As far as the devices’ Android Pie updates are concerned, we will surely keep an eye on the developments and bring you updates on the same when available.

NOTE: For more Asus-related coverage, feel free to check out this dedicated section. 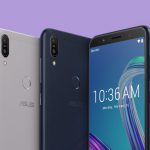