LG has been trying hard to keep up with the competition and rolling out software updates for its smartphones. Though there is no lack of innovation in the smartphone department, it just has not been fruitful for LG. However, the LG V30 reportedly is receiving the Android 9 Pie update.

Previously, we have covered and reported that the users of LG V30 in Europe and Canada started receiving the Android 9 Pie update. Moreover, the update also brought the latest September 2019 security update. We also covered that Verizon has rolled out the Android 9 Pie stable update for the LG V30 (model number VS996).

Below are some of the changes and enhancements that the update brought and which we expect to arrive with the latest Australian and Indian update;

The model number for the LG V30 that is receiving the update is H930DS and carries the software version 30b in India and V30c in Australia. However, it is quite unsure that what this update brings for the Indian users apart from the Android 9 Pie as there is no official changelog.

But, the Australian update brings in the latest September 2019 security update and weighs 749.73MB in size. Below is the official changelog and the screenshot for the update received on the LG V30 Australian model; For a refresher, the LG V30 was announced in 2017 and is powered by the Snapdragon 835 Processor paired with the 4GB of RAM and 64/128GB of internal storage. The device sports a 6-inch OLED display with a battery capacity of 3300 mAh that supports Quick Charge 3.0 as well. It also houses a dual-camera setup at the rear with 16MP + 13MP and a 5MP selfie camera in the front.

The device runs on the Android 7 Nougat out of the box and with this update, the device will join the leagues of devices running the Android 9 Pie. Interestingly, LG took a long time is rolling out the update but, as they say, better late than never.

If you are wondering how to check for the update on your LG V30 then, you can head to Settings>>General>>About Phone>>Software Update>>Update. If there is a new update available for installation then, you will be notified and you can install the update by tapping on that notification.

However, all the updates will be rolled out via OTA and will take some time to reach all the devices in India as well as in Australia. So, if the update notification is not available for you at the moment then wait for it arrives.

LG is not known for giving out speedy delivery of software updates for its users and this update also fits right in. Moreover, the Android 10 update will not be a reality for most of its smartphones let alone LG V30. 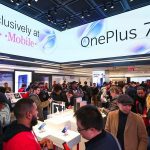