Looking for GTA V for Android? This Russian port should be helpful (Download links inside)

If you are a 90’s kid, chances are high that you had a bunch of Grand Theft Auto (popularly known as GTA) discs in your closet (yes, no digital download at that time!). I played the series on PlayStation 2, PlayStation 3 and of course tinkered with countless mods in the PC version. Rockstar Games made their fortune from this highly popular as well as controversial franchise. The whole series redefined the benchmark of open world gaming. Grand Theft Auto V is the latest entry in the lineup, originally launched on PlayStation 3 and Xbox 360 in 2013.

The developers officially ported a bunch of old GTA games to smartphones running Android and iOS, including GTA III, Vice City and San Andreas. Newer revisions, such as Grand Theft Auto IV and V, are not ported, although a official manual app for the latter was published. Amidst the bunch of scammy APKs across the interweb, a group of developers are actually working on an unofficial port of Grand Theft Auto V for Android using the Unity game engine. Believe it or not, they did publish a WIP build of the game on July 31 (yesterday).

According to the description, the name of the game studio is New Games Corporation. We are able to locate their Google Play developer account, and the discussion page in VK (aka Russian alternative of Facebook).

Mikhail Pozdnyakov and Yaroslav Bykhovsky are currently doing this impressive task of porting the monumental game with the help of designer Kirill Nikiforov. The gameplay video is based on a test build (v0.2.1), and the HUD is pretty much similar to existing GTA games on Android. The size of the current test version is nearly 450 MB (assets are included). Although basic features (such as navigation around the virtual city by walking and driving) are working, the level of optimizations are far from being ideal.

As a matter of fact, SoC specific tweaks are not present in this build, thus the game might shutter and lag horribly on your phone. Some Twitter users have already downloaded the port and tested on different phones; you are welcome to join the discussion. 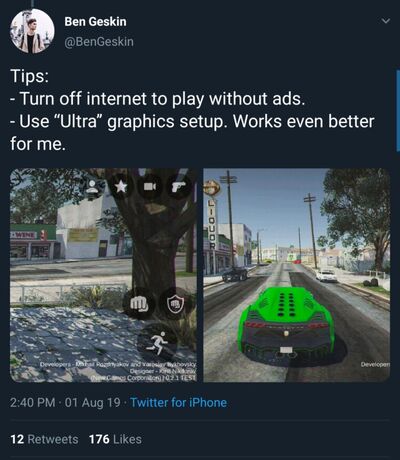 Grand Theft Auto is a registered trademark of Take-Two Interactive, the owner of Rockstar Games. It is highly unlikely that the port will see the light of the day without infringing tons of copyright. However, I would love to play this on a hacked Nintendo Switch as a mod/clone of GTA V!