[Battle Star & V-buck compensation] Fortnite v9.40.1 causing issues on iOS, or game crashing on iOS 13? Here’s what to do

What’s good is the problem was officially confirmed by Fortnite in time, and they suggested players to hold up and not install the buggy update until they take care of whatever lead to the mess.

We’re aware of an issue with updating to the v9.40.1 patch on iOS. Please hold off on updating until this issue is resolved. 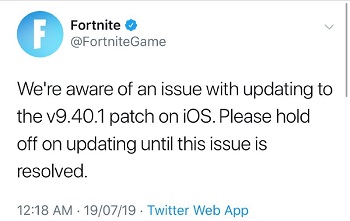 And now, after few hours of investigation, Fortnite Game glitch on iOS has been taken care of. The news came from Fortnite Game’s Twitter handle few hours back, where they are now suggesting players to uninstall the buggy version of the app and reinstall it.

After further investigation, iOS players can delete the app and reinstall in order to resolve the update error. A quick look at the App Store reveals a new update is circulating with build number 9.40.2. So the devs basically released the fix in the form of a minor update. That’s why affected users are being suggested to reinstall the patch.

All is well, that ends well. Another situation quickly handled by the game devs.

On the other hand, it’s worth mentioning that iOS 13 (beta) users of the app have already been complaining of app crashes. Social media platforms like Twitter is drenched with such reports. Here are some for you to take a quick glance at: Just in case you aren’t aware, few days back Fortnite officially acknowledged the app’s stability issues with the iOS 13 beta build. That’s why they suggested players not to use the beta version. But complains continue pouring in. So in case you are one of those who is facing Fortnite crashes on iOS 13, pay heat to what the company is saying and avoid the game on iOS 13 until the issue gets resolved.

Epic Games is now offering a compensation to 1000 V-bucks and 15 Battle Stars to iOS app users who encountered the error after the recent update.

We apologize for the recent error you experienced with the v9.40.1 patch. Here are 15 Battle Stars and 1,000 V-bucks as a gift to help make up for that. Enjoy! P.S. Fortnite Celebrity Pro-Am competition is back again, and this time it will be held a day before the Fortnite World Cup Finals. Here’s how to watch, livestream, participants and tickets.