Fortnite is approaching towards its Season 10, and the hype for the upcoming season has already elated players. Fortnite v9.30 content update #3 has gone live on July 9, and the latest update has brought a new item ‘Air Strike’ to the game.

In Fortnite Season 9, Epic Games has added ‘Fortbyte Challenges’ in addition to Weekly challenges for the game which goes live every Thursday. So the official list of challenges for Week 10 of Season 9 has gone live.

Each week Epic Games releases a list of challenges, both for battle pass owners and free users. Battle Pass challenges can only be accessed if you have purchased a Battle Pass for this game that costs 950 V-Bucks. The above-mentioned challenges are leaked ones, and it may change before the official list goes live. So, make sure to check again, if there will be any changes, we will update this column.

Now let us have a look at how to complete the challenges for Week 10 of Season 9.

Use an Air Strike in 3 different matches – 5 Battle Stars

Air Strike is a new item which has been added to the v9.30 third content update. It is a very simple challenge and can be completed very easily. You just have to throw this item, and the best part is you don’t have to eliminate or deal damage to your opponents. Shotguns are a pretty popular weapons in Fortnite, and who doesn’t want to eliminate an opponent in a close encounter.

If you are good at a close range fights, this task should not be a problem for you. You have to deal 500 damage to your opponents.

Well, searching for Ammo boxes should not be a tough task. Ammo boxes can easily be discovered if you land on any named location of the Fortnite map like Neo Tilted, Pleasant Park, Mega Mall or Polar Peak.

You can also use this video guide for your reference, presented by courtesy of Tabor Hill, YouTuber & Gamer.

Stage 1 of 3: Collect Wood from a Pirate Ship or Viking Ship – 2 Battle Stars

Stage 2 of 3: Collect Stone from a Fork Knife or Umbrella – 1 Battle Star

To collect some from stone a Fork Knife, you need to visit the location mentioned on the map below. It is situated near the Fatal Fields. To collect Stone from Umbrella, you need to visit the west of Lazy Lagoon as mentioned on the map below. From any of these locations, you have to craft 100 stone material. 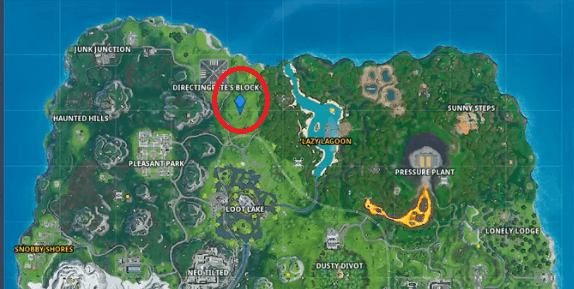 To complete this challenge you need to visit the Pressure Plant location on the map and craft 100 metal material.

To complete this challenge, you are required to visit Pleasant Park or Paradise Palms. Both of these are fairly crowded areas, so make sure to use sniper or assault rifle if you are good at aiming from a distance far away. If you are good at close encounters, you must use shotguns.

Deal 200 damage to opponents with a pickaxe – Five Battle Stars

This challenge can be a tricky one as you need to be really close enough to use a pickaxe on your opponent. The best time to do this challenge is at the time of landing.