2016’s Mi MIX was a revolutionary phone. Xiaomi boldly stepped out from their typical design language and collaborated with French designer Philippe Starck create something minimal, futuristic as well as premium. The Chinese OEM did not abandon the series as an experiment; rather subsequent yearly iterations of the Mi MIX series continued to fill the void regarding elegant and designer flagship phones with a reasonable price tag.

The third generation in this lineup, aka the Mi MIX 3 was succeeded by 2019’s Mi MIX 3 5G. Although the naming convention suggests the new phone as merely a 5G capable variant of the original, the actual list of changes are rather long.

Nonetheless, Xiaomi enthusiasts are hoping for a true fourth gen Mi MIX phone. To the community, Mi MIX 3 5G is more of a stopgap release. The company prefers to maintain a silence regarding Mi MIX 4, but some leaks eventually triggers the speculations.

The first one came from Mishaal Rahman, Editor-in-Chief of XDA-Developers portal. According to him, the OEM is working on yet another Snapdragon 855 powered phone with a codename ‘hercules’. There should be 3 rear cameras, in-display fingerprint sensor and wireless charging. Sounds interesting, doesn’t it? The next one is about an upcoming Xiaomi/Redmi phone with a 64 MP camera. XDA member and xiaomi.eu contributor Kacper Skrzypek (aka kacskrz) discovered the following strings inside MIUI stock camera app. 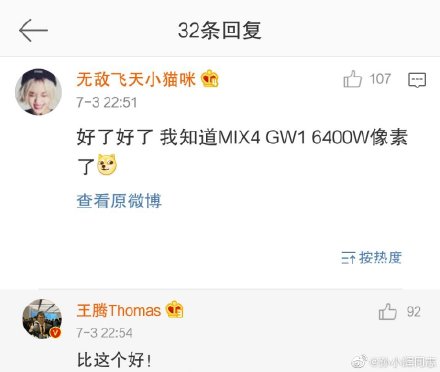 In a Weibo conversation, he answered one fan that the camera should be ‘better than’ the Samsung GW1 64 MP sensor. Is it an indication of incorporating an yet-to-be-released camera sensor, possibly from Sony, in the Mi MIX 4?

At this moment, these are nothing but conjectures and theorizing. In any case, Xiaomi fans would love to see the Mi MIX 4 sporting a high end 64 MP camera sensor with additional flagship grade configuration.

Next article Realme Android One: Should the company jump into the game?