After the demise of Windows Phone (Windows 10 Mobile), the choice of smartphone OS among users are pretty much restricted to Android and iOS. However, the smart TV segment is rather complicated.

Besides the TV optimized version of Android (Android TV), we have LG’s webOS, Samsung’s Tizen and tons of no-name Chinese manufacturers running a custom edition of Linux inside their so-called ‘smart TV’. While the adoption rate of Android TV among OEMs is increasing, Xiaomi decided to take a different move. Their first generation of Mi TVs, especially the global/Indian variants, featured something called ‘PatchWall’ – a highly modified skin based on Android. 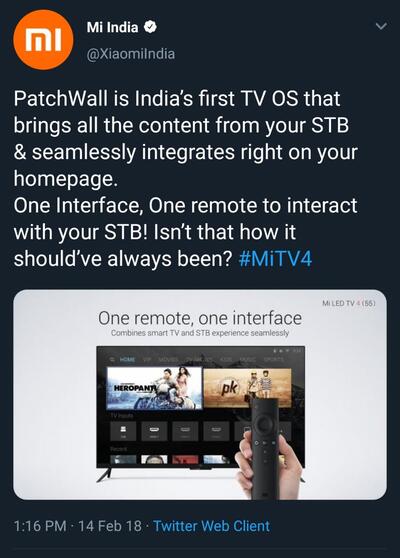 Xiaomi packed a handful of innovative features inside the skin, but the lack of Android TV compatibility and missing Google Play Store turned out to be disastrous for them.

The company quickly announced to bring Android Oreo based update with built-in Chromecast and Play Services by 2019 to console their customers.

Well, we are on the second half of 2019, but there is no such update from Xiaomi. The Chinese OEM has already added new models in their product portfolio, and they do come with proper Android  TV support.

Frustrated Mi TV 4/4A owners are slamming the company in their official forum as well as social media, but the effective output is nil.

Time for the good news!

Seems that Xiaomi has not abandoned their customers, as the company officials are now teasing about internal beta builds of Android TV based update for Mi TV 4A (both 32 and 43 inches models).

We have also digged into the Play certified device list from Google and spotted a number of new references of related to legacy Mi TV (4/4A) models.

We are not sure whether Xiaomi will create a public beta testing phase before rolling out the final stable update or not, but these entries are enough to speculate that the long-anticipated Android TV is finally coming to old Mi TV 4A/4 units.