Remember those megapixel wars back in early days of camera equipped phones? The winning formula was to squeeze as much as possible MP in the camera sensor, because regular consumers did not bother about the truckload of hardware and software based features necessary to produce a good picture.

Call it a vicious circle of tech, but the same megapixel wars are back now. Samsung and Sony – two major camera sensor designers – produced different 48 MP camera modules this year.

Between Samsung’s ISOCELL GM1 and Sony’s IMX586, the latter took the pole position as most of the flagship (and even mid rangers) Android phone of 2019 pair the 48 MP IMX586 sensor with one or more secondary cameras.

The working principle of these high resolution sensors are based on a technique called ‘pixel binning’, where the data of adjacent pixels are being combined to produce a sharper and clearer image. The underlying SoC needs to be compatible to handle this tremendous workload, otherwise the sensor alone can’t do much.

Brace yourself young padawan, as the next iteration of the monstrous camera sensors are on their way! None other than Realme is bringing the first 64 MP smartphone camera in the market, as confirmed by Madhav Sheth, CEO of Realme India. 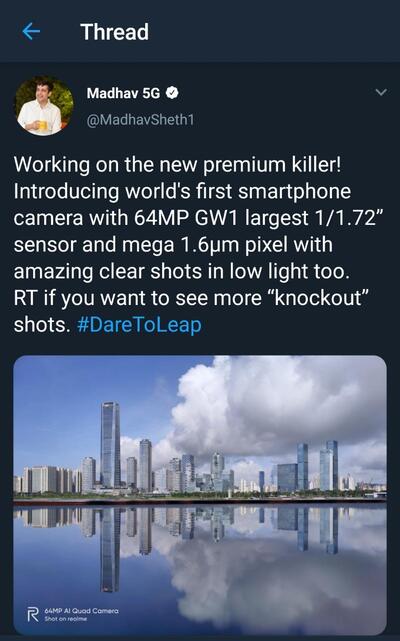 The camera sensor of this unnamed phone is made by Samsung. ISOCELL Bright GW1 is the spiritual successor to last year’s GM1, which comes with the patented Tetracell technology and remosaic algorithm.

The ISOCELL Bright GW1 is a high 64Mp resolution image sensor designed to take bright and sharp photographs in any lighting with Tetracell and 3D HDR technology. The ISOCELL Bright GW1 features 0.8um pixel with ISOCELL Plus technology that significantly increases light sensitivity and color fidelity for more accurate and clearer photos.

In case of low light photography, the sensor is designed to downsample the output to 16 MP to improve the quality of the photo. However, the sensor can output to its full potential (aka 64MP) in bright light.

The screenshot clearly mentions ‘AI Quad Camera’, which indicates that the Chinese OEM incorporated 4 rear camera modules in the upcoming phone for the first time. Moreover, it is officially ensured that the phone should initially be launched in India in Q4 of this year. Is it Realme 4 (Pro)? Or will the company debut a completely new series to compete with the flagships? Comment below. Head over to the original tweet to experience them. On the other hand, don’t forget to read about the upcoming camera enhancements in Realme phones.

Realme India is organizing a Camera Innovation Event at Delhi on August 8. The OEM will unveil the first 64 MP quad camera phone in this event. Details here. 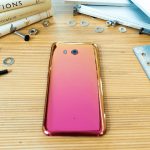 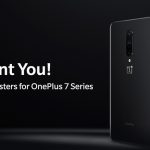