Hangouts video download issue on Android not fixed even after months

Google will discontinue their communications platform Hangouts for G Suite customers sometime in October and replace it with Hangouts Chat and Meet. While the change will initially effect customers who pay for Google services, once the transition completes for GSuite, the service will retire for regular consumers too. But that still has time. So regular users may continue using Hangouts at least during this year. Even G Suite customers can enjoy the service for few more months. Though Hangouts is still available, is the company losing interest in fixing the bugs and issues that plague it?

Well, we say so for recently we highlighted a Hangouts problem that despite being a known issue continues to be reported till date and awaits a fix. The bug creeped in after Google+’s termination, where users chime many of their contacts have either disappeared or are now displayed as ‘Unknown.’ 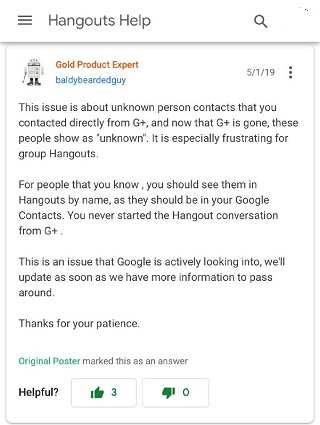 And now we have caught site of yet another issue which has been officially confirmed, but there’s no ETA as to by when it would get resolved. So lets take a look into what this problem is.

For past few months, Hangouts Android app users have been been complaining of not being able to download videos. The issue reportedly instigated after the February update, where after downloading a video, it doesn’t show in Gallery, and the downloaded file (in Downloads folder) throws an error.

Apparently, Hangouts is downloading the thumbnails instead of the actual video file. Take a look at how a couple of users explain the problem at Hangouts help:

I can long press a video in hangouts chat to download it, however the downloaded file will not appear in my gallery, and trying to play it from my downloads folder either results in an error or a still image depending on the player I use. The downloaded file is also unplayable if it’s transferred to a computer.

Hangouts seems to be downloading the preview picture only but calling it a video. (Rename the downloaded file extension from mp4 to jpg and you’ll see what I mean) Your phone expects the video but gets confused because the file is actually a JPG picture file. The “experts” recommend providing feedback via the Hangouts app because more feedback might make it higher priority – wishful thinking.

Coming to what has the company said and done so far, back in March, an expert at Hangouts help informed a user that the concerned team is looking into the issue and suggested them to provide feedback.

Then last month, the same expert said the issue has been highlighted to the concerned team, but there is no ETA for fix. Here’s their exact statement:

The inability to download inside the Android Hangouts app has been reported to Hangouts, but I don’t know when there may be a fix. Here’s hoping the devs do the needful to fix things up at the soonest. In the meantime, as suggested by the expert, you can use the desktop client to download videos. Rest assured, we are keeping an active tab and will update the story as and when any new development comes to out sight.

Next article OnePlus 7 (Pro) proximity sensor demystified: How it works (or gets buggy)