In today’s smartphone-obsessed era, it’s difficult to keep kids away from the ever-so-inviting unexplored world that’s just a click away. It’s completely genuine for parents to feel the urge to lockdown or limit their child’s access to smartphones/tablets to protect them from falling for the bad.

Google made things easier with Android 4.3 by adding a parental-control feature named Restricted profile, so that parents could give kids their personal tablets without worrying about what kind of content they get to access. But this Android features is available only on tablets not smartphones. A win-win for parents as well as kids, right?

But for about a year now, tablet users with devices from Korean OEM Samsung have been encountering an issue related to Restricted profile that sadly hasn’t received a fix till date. The problem apparently creeped in after installing Android Oreo and never left.

Samsung tablet users with devices like Galaxy Tab S3/S2, Galaxy Tab A have reported across the company’s official help forum that from their admin account they install new apps from Google Play Store without any problem, but the same apps don’t show in the list in the restricted user account. Basically, the App and Content Access menu which allows admin to control/restrict the apps for the restricted account aren’t displaying newly installed apps anymore. That means, restricted users can’t access new apps from Play Store and are left only with the standard stock apps.

Here’s how some of the affected users word the issue across Samsung Community and other discussion platforms.

When I install new apps on my (admin) profile, although these apps work for me, when I go to my kids’ restricted profile settings, if I wish to enable the apps for their profile, the apps are NOT even listed in the “App and Content Access Menu” (The menu that lets me toggle on/off which apps show in their profiles). This used to work well new game apps were added, now suddenly new apps do not show at all, only the apps installed prior to July or so are showing.

The point is, restricted users may also not use the Play Store to install new apps, so in effect, there is ABSOLUTELY NO WAY to get any apps except the standard stock apps into a restricted user’s account. That does not make any sense at all.

I’m having the exact same problem. I literally just ran the system update to Android 8.1.0 with Samsung Experience 9.5 and after it finished I installed a couple of apps from the Play store which are free (for my kids). I am able to run the apps from the Administrator profile without issues. However, when I go to a restricted users settings menu the newly installed apps do NOT show in the list. So, obviously the issue is that the list of installed apps is not being updated appropriately after the update. Apps that were installed prior are still there and enabling / disabling them works as normal.

Something similar was posted even across micro-blogging site Twitter as well as other online discussion platforms. One of the complainants on the company’s official European help forum even shared images of how Play Store installed apps showed up in the Restricted user account earlier, compared to what it displays now. Here’s how the user explained the images:

I have two screenshots here: one is from the account that existed previously. It clearly shows 3rd-party Play Store apps in the Oreo restricted profile with enable/disable options. The second is from a newly-created account under Oreo. It only has the standard apps to choose. An app I installed under Oreo does not show up in these screens. It is, however, on the home screen and can be run.

Here are the images they shared: Restricted profile showing only stock apps, rest are grayed out

Back in December last year, one of the affected users who got in touch with Samsung support shared that they’ve been informed the problem is a know one and may get addressed in the next Android OS update i.e Android 9.0 Pie. Here’s what the user said:

I talked to the Samsung Germany support on Thursday. They know about and acknowledged the problem, however, there is no cure. The technician I talked to hypothesized about the upcoming Android P (roll-out to Samsung devices is planned for 2019) may fix the issue. 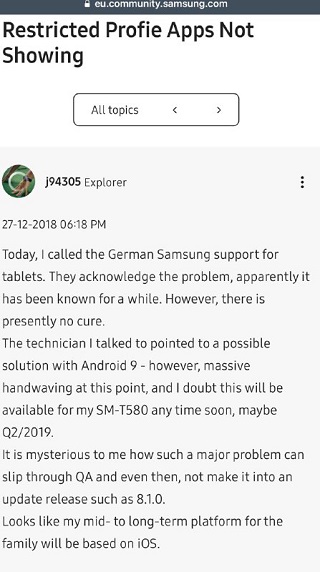 While reports never stopped coming and continue to do so till date, finally, now after a long period of silence, one of the forum moderators at Samsung Community acknowledged the issue while reverting back to one of the affected users saying:

We sincerely apologize for the frustration. We are working to resolve this issue. While it’s good that forum moderator confirmed the problem, when the same user asked if they could provide an ETA regarding fix they said they don’t have any estimate about it.

We do not have a time estimate for this. While it’s appeasing that Samsung has at least officially confirmed newly installed Play Store apps not showing issue with Restricted profile on tablets, and that they’re working on resolving the issue, sadly there’s no information about by when will the problem get resolved. So all you can do is wait.

Considering that the problem has already troubled a lot of Samsung tab users for about a year now, we hope the company’s fixes whatever’s causing this Restricted profile-related glitch, so that restricted account users can continue using Play Store apps.

Rest assured, like always, we are keeping an active tab on the matter and will update the story as and when any new development comes to our sight.

Just in case you have been facing the same issue and have figured out a workaround to resolve the problem, feel free to share with other affected by commenting below.