The emerging smartphone brand Realme has vigorously launched one after another devices like Realme 1, 2, 2Pro, C1, U1 and 3 in a short span of a year. This may indicate that their brand is gaining popularity as well as users’ trust.

Taking another step ahead, just yesterday, the company unveiled two new birds in the nest, Realme 3 Pro and Realme C2. While the mid-ranger Realme 3 Pro is powered by Qualcomm Snapdragon 710 SoC, VOOC flash charge 3.0 and Color OS 6.0 based on Android 9.0 Pie out of the box, Realme C2 embraces Mediatek Helio P22 chipset and Color OS 6.0 Lite based on Pie. 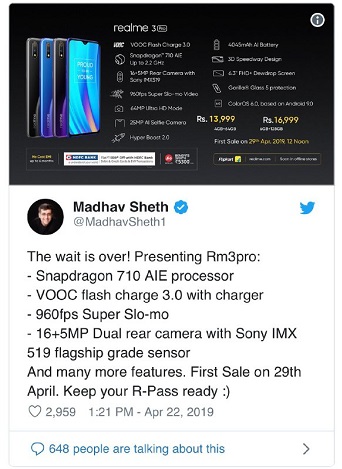 The company surely is living up to Realme 3 Pro tag Speed Awakens as there is no stopping even after the launch event. Realme CEO Madhav Sheth has now shared the schedule plan regarding when will Realme phones be getting the much awaited Theme Store.

Users continue to inquire about when will they get the Theme Store update across Realme Community as well as other social media platforms.

In Realme 2 pro when will theme store come? any ideas???

plzzz anny one help me.. I need a theme store

we are all near end of April no news for theme store for realme 2 pro why?

Here are a couple users inquiring about the same on Twitter Theme Store, as one can guess from the name itself will provide Realme users some fancy themes and wallpapers for their phones. Theme Store was part of Color OS 5 on Realme 1 phones, but somehow didn’t make to next in line devices.

Back then, Theme Store on Realme 1 offered free as well as paid themes and wallpapers, and changing the theme also changed the app icon layout, lockscreen wallpaper as well as the system font. And now, as per the company’s latest announcement, this feature will be making way to all Realme devices soon.

Madhav as usual took to Twitter to share with Real me users that while the latest 3 Pro and its kin Realme 3 will get Theme Store in next month’s update, Realme C2 will be shipped with the same.

Coming to the older devices, they also added that earlier Realme phones, that is, Realme 1, 2, 2 Pro, C1 and U1 are due to receive the Theme Store update with Android Pie which will be in form of an OTA. So those of you who have been waiting for Realme to bring back the Theme Store, you’ll get to see it soon.

As for when exactly will Android Pie based Color OS 6.0 be pushed to Realme phones, there’s still time. Just in case you aren’t aware, the company first announced that Pie will be rolling out to Realme devices in the first or second quarter of this year. But, soon as Q1 terminated, they came up with the updated statement that Android Pie has been delayed to the end of second quarter i.e. June. Lets hope this time Realme lives up to their promise and delivers Pie in time so that users can get hands on the Theme Store as well. Rest assured, we’ll let you know as and when that happens.