Intel released their 8th Generation of Central Processing Units (CPU) in late 2017. They brought numerous improvements in performance as well as energy consumption compared to the 7th generation.

The Intel 8th Gen chips range from mobile to desktop and from i3 all the way up till i9. Intel 8th Generation processors are much faster than the previous generation of Intel processors. This is thanks to the increase in the number of cores from a maximum of 4 to a number double of that.

Another major factor, is that Intel also increased the maximum clock speed and optimized video performance. Intel 8th Gen also brings major improvements to its performance mobile processors lineup. The base clock speed and the introduction of the Intel Turbo Boost Technology 2.0 are among them.

The most likely processors to be purchased by consumers mostly belong to the i3,i5 & i7 categories. The comparison chart between the three main categories of the i5 8th generation can be seen below. 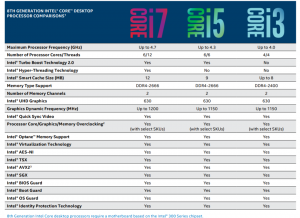 The leaked CPU belongs to the Amber Lake family which is the latest in the list of 8th gen Intel chips. The Amber lake series will have 5 products in its lineup including the leaked i5-8310Y. The 8th Gen Intel Core Y-Series Processors bring a plethora of new features to the table. The Y-Series improve connectivity, performance and security. A new 8th gen i5 CPU has been identified in an official Intel document. The document attached lists several models of the Intel 8th generation lineup, however, a new model can be seen in the list.The leaked chip is the Intel i5-8310Y, with the product code, HE8067702739888. The leaked was caused because of Intel notifying regarding the change in laser marking equipment for its chips.

This confirms the existence of the i7-8510Y, rumored in the MacBook Air, @liliputingnews these can be processors that we could find in future Mini PCs

Samsung Galaxy S10: How to manually unbrand & update US models