The phablet form factor used to be a game changer thing. Samsung redefined the genre with their Galaxy Note lineup and set the benchmark.

Some OEMs tried to step into the shoes, but the S Pen along with Samsung’s optimization of their apps for the large form factor helped the Korean giant to stay on the throne.

Lately, there has been a change in the smartphone design language. The tablet market is shrinking rapidly, and the form factor is gradually is converging with phones. Manufacturers force end users to opt for larger phones, as 5 inch or lower models are getting obsolete.

The Lenovo Tab V7 is a budget phone with a huge 6.9" display and 5180mAh battery https://t.co/1YSYHzoBhY #MWC2019 pic.twitter.com/QXSMdn0zFX

However, Xiaomi is a notable exception. The Chinese OEM actually embraces the phablet form factor with their Mi Max lineup.

As a tradition, the Mi Max series acts as a buffer between the cost effective Redmi phones and the higher end flagship grade Mi lineup. The internal configurations of Max phones are often similar to upper tier Redmi Notes, with the inclusion of larger battery and way bigger display.

Continuing the tradition, 2018’s Mi Max 3 (codename: nitrogen) was built on Redmi Note 5 Pro (codename: whyred). By the virtue of Mi series, the Max lineup is eligible to get two major Android version updates, whereas the Redmi Note phones are usually limited to one.

Fortunately, Xiaomi is trying to bring useful enhancements in their software development process. Redmi Note 5 Pro is a part of Pie beta testing, which makes it first phone in the Redmi Note series to get two major updates.

Battery capacity is 5500 mAh, and the phablet supports 18W Quick Charge 3.0 charging over USB Type-C port. Xiaomi has been testing Android Pie for it since few days via their beta channels, and pushed stable build for China in the last week of February.

On the other hand, the global users on stable channel are stuck with MIUI 10.2.1 based on Oreo since December. Today they are finally getting the sweet Pie update.

The MIUI version number is unchanged though, just the minor identifiers are different. For sideload fans and manual flashers, here is the download link: No fastboot flashable package is available for now, but we hope it will be live soon. Xiaomi implemented Anti-Rollback (ARB) in this device, so downgrading to Oreo will be almost impossible for regular users.

Those who are locked bootloader with a virgin, unmodified device, you can manually flash the update zip using built-in System updater.

FYI, there is a Russian variant of this phablet. Although hardware wise they are identical, the Russian version is lagging in terms of updates and still running Android Oreo. 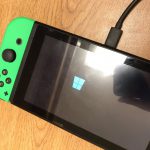 After Linux and Android, Nintendo Switch getting Windows 10 ARM