Software based image enhancement is considered as a vital parameter in smartphone photography. For example, Google’s Pixel lineup is universally praised for its camera capabilities. The actual credit goes to the AI backed computational photography techniques.

Another similar use case is audio output. Surround or even stereo speaker setup is still not common in smartphones. Manufacturers try to compensate it by introducing software based sound processing engines. Dolby, the parent company, collaborates with various OEMs to implement the enhancement mode on phones.

A quick look in that list does not say anything about Xiaomi. Though Xiaomi is a licensed partner of Dolby, the Chinese smartphone maker doesn’t ship Dolby Atmos with their phones. MIUI by Xiaomi does come with a built-in equalizer and a separate audio processing engine, dubbed as ‘Mi Sound Enhancer’. 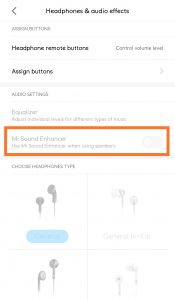 Xiaomi created a new sub-brand called Poco/Pocophone and launched Poco F1 in 2018. Android community compared it with OnePlus One for packing flagship like specs under budget.

Like it’s siblings, Poco F1 comes without any third party audio processing engines. It all changed, when Xiaomi started recruiting beta testers for MIUI 10 for the phone.

System
1. We optimized CPU usage on a very deep level to make the UI super fluid.
2. We also removed redundant system animations, so all your interactions with the screen feel smooth and silky now.
3. Sound got better too! Now with Dolby support.
4. System sounds and ringtones got a massive update as well. The announcement was made in August 2018. Poco F1 first received beta, and subsequently stable MIUI 10 update based on Android Pie. While the team fixed many nasty bugs and brought new features, Dolby Atmos did not make it.

Poco users tried to highlight the issue on various platforms, but Xiaomi preferred to remain silent.

@jaimani sir can u confirm that dolby support is coming for poco f1 in miui 10 update ! Some devlopers thread said this ! Plz reply sir

Here are my some question on Poco.
1) Are you working on any community for poco device only?
2) will poco f1 support dolby atmos as mentioned in a thread of Miui forum?
3)What about L1 support for poco F1?
Main Question..
4) When I'll get first stable update(no bugs) for poco f1?

Will there be any dolby support in future for poco f1.i asked same question so many times pls just tell yes are no?

Xiaomi’s official forum is also getting populated by similar threads, where people are asking about ETA. Yesterday, Alvin Tse of Pocophone Global gave a somewhat demoralizing statement about the situation. According to him, the initial announcement about Dolby (Atmos) was merely a mistake. 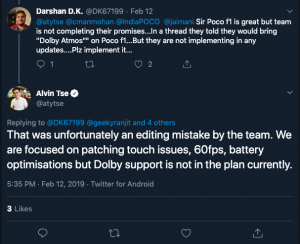 The development team has returned from vacation after Chinese New Year and they are working hard to resolve issues like sloppy touch response and battery drain. The February update is already delayed and expected to be released by early March.

Alvin specifically mentioned that the dev team doesn’t have any plan to bring Dolby’s audio enhancement in near future.

Yea editing mistakes mean that the team put it in falsely. Unfortunately no plans to support that now

This type of events only bring frustration among fans and followers, who eagerly wait for official Dolby Atmos support from Xiaomi.

For rooted users, there are multiple options to bring extra audio enhancements. From tiny Magisk modules to specialized drivers with separate equalizer – one can play with plethora of options.

Unfortunately those are not applicable for generic users running stock, unrooted phones.

Another day, another false promise from an Android OEM. 😒

Next article [Re-released with new build] Redmi 5A getting stable Android Oreo with MIUI 10.1.2