Nokia phones may have risen from ashes, but do they've same soul? - Part 1

Ever since the ‘Nokia’ brand name was resurrected by HMD, people are loving it. HMD has brought the legacies back by re-introducing premium build quality and unique design aesthetics.

HMD chose Android One as the default OS platform for Nokia phones, after the initial launch of Nokia 3, 5 and 6 in 2017. While those device trio run close to stock Android, shifting to Android One ensures timely updates from Google, access to exclusive services like Digital Wellbeing and possibility of getting early developer preview builds of next Android version.

It is not a secret that HMD chose Foxconn as the ODM (original design manufacturer) of Nokia branded devices. To be specific, the actual ODM is FIH Mobile Limited – a subsidiary of Foxconn.

As a matter of fact, FIH designs Android smartphones for other vendors such as Sharp or Infocus.

It is uncommon for vendors across the globe to sell rebranded phones based on same reference design. Besides cheap MediaTek SoC based phones, the 2nd gen Qualcomm Android One phones (codename: seed) are the prime example of this practice. ‘seed’ phones were nothing but rebranded Longcheer L8150. 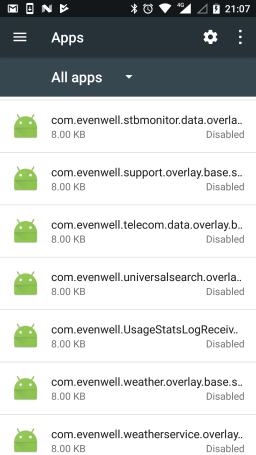 Whilst idly surfing the web today I found something very interesting. InFocus smartphones are made by Foxconn and branded by an American company. They are sold in China, India, Taiwan and maybe some other places. I decided to contact them and received some mail undeliverable notifications, but not from an InFocus domain, I received them from fihtdc.com!

Apps from similar vendors can be found inside the firmware of Sharp/Infocus phones as well.

Some of these apps are accused of fiddling with background apps and sending user data to Chinese servers.

Don’t you think Nokia is defaming itself and drifting away from the ‘bloat-free’ standard?

For the sake of argument, having a common software development team is not an illegal act. But sharing same bootloader and kernel across different devices is little too much.

Have you ever heard any manufacturer used the same kernel and the same bootloader across at least 5 devices with the same SoC, different brands and different models? FIH did that.

FYI, Hikari Calyx is a major contributor in the development and modding scene since Windows Phone days.

Without being too much dramatic, allow me to unfold the mysteries. Phones from Sharp and Nokia often share exact same internal components. It can be possible to cross-flash and convert Sharp Aquos S2 to Nokia 7 Plus Android One edition. ?

Interesting. Now SHARP Aquos S2 has become into Nokia 7 Plus. Thanks @heineken_78 . pic.twitter.com/67vkGabCyA

While modern Nokia phones comply with Android One, they come with a locked bootloader. The bootloader is not permanently locked, but Nokia hesitated to come up with an official unlocking mechanism.

We would unlock one model at the time. What device would you unlock first?

(Mikko Jaakkola was the CTO of HMD during that period.)

Sorry, we wont unlock it due to security however we will share our kernel modifications back to the open source community, wip

(Juho Sarvikas is the current CPO of HMD.)

Great feedback. Chatted with our CTO @MikkoLJaakkola and agreed to look at this. Please allow us to focus on ramp up first. #heretolearn

HMD/Nokia becomes consistent with sharing kernel source codes but the bootloader unlocking got stuck in limbo. After an year of initial announcement, they started allowing bootloader unlock for exactly one phone – Nokia 8.

To the passionate developer and modding community out there, we have news to share!

On the other hand, the modding community was not behind in the race. Vulnerabilities and access (?) to FIH’s internal infrastructure made it possible to unlock bootloaders of multiple Nokia as well as Sharp phones.

Here are bootloader unlock requests I received from yesterday. pic.twitter.com/L8HAumyhH5

From today, I can process bootloader unlock requests from Sharp Aquos S2 users - even if you upgraded to Android O. The unlock procedure is totally the same to Nokia phones.

Don’t these facts clearly indicate that the current Nokia phones are merely carrying the name of the legend, not the soul of it?

This article is the beginning of a multi-part series, where PiunikaWeb is trying to disclose some fascinating behind-the-scene phenomenons around HMD/Nokia.

We will cover topics like prototype device hunting, homebrew firmware and bootloader unlock techniques in future, so stay tuned!