There are new updates that have been added at the bottom of this story….

Nearly a couple of months after announcing a complete ban on adult content, Tumblr has made another major change. No, it’s not related to the content this time. Instead it’s about the look and feel of the platform.

In a staff post titled ‘Tumblr is getting a facelift‘, the company announced the switch to a new look is being done to stay inline with the Web Accessibility Initiative of the World Wide Web Consortium.

This is the initiative that sets standards for accessibility for people who may need assistance using the internet. It outlines steps to take and tools to use to create as seamless of an experience online as possible, whether you have auditory, visual, or neurological disabilities, are using a limited device, are on a slow connection with limited bandwidth, or…well, a whole bunch of other reasons

The other major change is related to color contrast. Here’s how Tumblr explains it:

Part of making Tumblr more accessible involved upping the color contrast in our UI, most notably on the dashboard and everywhere else that familiar blue touches. The light grays and muted blues had a contrast ratio of 2.02:1. What does that mean? Bad. It was bad, and we needed to do better by people with visual impairments

To give you a better idea, here’s a user shared look of their new dashboard (click/tap to view full size):

The blue is darker, the grays are lighter, all the buttons and icons are brighter with our new brand colors, and it has a contrast ratio of 7.87:1 What does that mean? Good! Very good

The company, however, admits this new dashboard look negatively impacts the bluespace art that users have created for many years now. Sadly, Tumblr says there’s no workaround for that.

Seeing these older posts lose the utilization of the dashboard—something that made them so special and unique to just Tumblr—is certainly not a great feeling. There’s no way around that. We hope, however, that this change only means newer, more bluespace art will be created, and that this time around it will be easier for everyone to experience

This new update has started rolling out slowly, and should be available to all Tumblr users in days to come.

Are users happy with the facelift?

It’s too early to comment on that, as the official announcement itself is only a few hours old. Still, we tried to find some early reports from users and here’s what all we stumbled upon: This is the kind of change that drives users nuts. They do it with zero input or warning, they only speak up after they've rolled out the change. It's also both subtle and noticeable, so like, it certainly made ME feel anxious, like am I hallucinating? What's different?

But like, they should have hired an accessibility consultant. They just need to stop half assing things for very bad attempts at being PC and hip or whatever their motivations are. This goes right with bad AI programming for the damn ban.

Terrible update, you can't look at your dash for more than a couple of seconds without getting a headache. Bless x-kit people for saving our eyes and sanity.

It's the worst thing they have done, it makes my eyes hurt and gave me a headache when I logged on this morning.

OOOH! JUST saw it a few minutes ago! It's pretty. :D

Also, looks like Tumblr forgot this page before making the change:

Tumblr changed their background colour to dark blue for "accessibility".

Only they forgot about their GDPR consent page. Now illegible.

Yes, same Tumblr that filtered out its own "acceptable" example images.

And which put a GDPR HTML wall in front of RSS feeds.

Anyway, what do you think of this new update? Let us know in the comments section below.

How to revert to the old blue?

If you take a look at social media platforms, especially Twitter, you’ll see the number of those who aren’t happy with this color change is far higher than those who are happy with the new update. If you are among the former lot, you’ll be glad to know there’s a way to revert to the old blue layout.


In case you aren’t aware of xkit, you can learn more about it here.

Check out our latest story related to this update. It’s titled “My eyes hurt” – New Tumblr UI update gets thumbs down from lot of users. 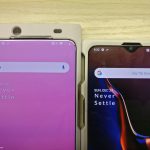 Early speculation: OnePlus 7 may feature HDR streaming out of box