Updates muddling the battery performance of smartphone devices is one of the commonly reported problems. We recently highlighted one such excessive battery drainage problem on Essential Phones that reportedly instigated after Android 9 Pie update.

Essential not only acknowledged the problematic battery behavior, but also said the problem “appears” to be an issue at Google’s end. Since we highlighted Essential battery drainage post Android Pie, we have been approached by a significant number of Google Pixel and Pixel 2 owners who say they are also encountering similar battery issues after installing the Pie update.

Before you point out, we know that a new update usually takes some time to settle. But considering that complaints continue to pour in even weeks after the update’s launch qualifies the problem for at least an investigation. So this story is for the baffled Google Pixel/Pixel XL and Pixel 2/2 XL users who are trying to figure out if or not they are the only ones affected and what could be potentially causing the battery mess on their units after installing Android 9.0 (Pie).

After installing the newest Android OS, if you are facing battery drains on your Pixel (first or second gen) phone, then find solace in the fact that you aren’t alone.

The problem appears to be quite widespread and affecting a lot of Pixel users.

Google Pixel 2 XL + Android Pie seems to kill my battery within a few hours of light usage. Is this a common issue? Wasn't when I was on 8. #android #Pixel2XL #AndroidPie

Ok, so I'm NOT crazy. My battery IS actually draining faster than before pie install.

Multiple threads have been posted across Pixel User Community (1,2,3,4,5,6,7,8) in past couple of weeks with users explaining the issue saying they lose about 20-40% battery (after installing Pie) without doing anything out of ordinary with their phones.

Severe battery drain after Android pie update. Battery doesn’t last at all.. 40% drain in the last two hours after charging it full.. Tried closing all the apps and restarting the device but no solution to it.. Help!

Same here. Pie drastically reduced battery time on the phone. On Oreo, I could go 2 days on battery saver mode. On Pie battery saver, I have to charge my phone 4 times a day. 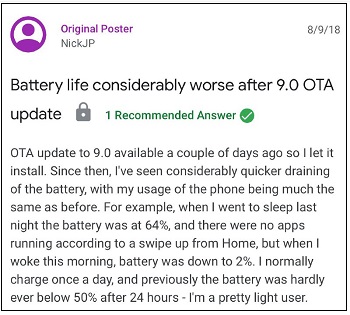 My battery had also experienced a sharp increase in power usage/drain. After the Pie update, it went from being about to go all day without having to be charged until the next morning to losing as much as 10%-20% in the span of an hour while asleep.

My 2 cents. Pixel2XL battery use to drain 5 to 10% overnight, since P update it consistently loses 40%.

Apart from user complaints, Google’s own issue tracking website currently has multiple bug reports filed (1,2,3,4) discussing battery drains after 9 Pie. And similar reports can be seen across Reddit (1,2,3,4) and others online discussion platforms.

Going by one of the discussions on the official Pixel help forum, the battery drain may have something to do with WiFi (set with a static IP).

One of the affected users who engaged in a bit of testing to diagnose the actual cause shared:

I also had bad battery drain problems with WiFi on a Pixel 2 after updating to Pie, and I also found that the solution was to use DHCP rather than set a static IP address. Earlier today I charged to 100% and left the phone idle with screen off for 1h50m with static IP set, during which time the battery dropped to 89%. I then changed the phone to use DHCP and toggled WiFi off and on. After a further 2h45m with the phone idle and screen off, the battery had only dropped by a further 1% to 88%.

I’ve been using static IP on my home WiFi for several years, on this Pixel 2, original Pixel, and Nexus 4 and 5, and not had any battery life problems until the recent update to Pie.

In fact, one of the Product Experts (at Pixel User Community) was able to reproduce the user-shared behaviour and even escalated at least this particular use-case related to battery drain. The same has been filed as a bug on Google’s Issue Tracker as well.

While there is lack of clarity as to what could be the root cause, those affected are reportedly blaming Adaptive Battery, Google Play Music, Google Play Services and WiFi for instigating severe battery drains.

Currently all is up in the air. We hope Google clears the air on the matter soon.

Meanwhile, workarounds like disabling Adaptive Battery and resetting WiFi to DHCP (instead of static IP) did the trick for some, but not all. You can give the workarounds a shot to see if they resolve the battery drains on your Pixel unit.

Anyway, we are keeping an active tab and will let you know if any further development takes place on this front.

Google has responded on the Issue Tracker thread where the battery drain problem is being discussed.

A company employee said the development team has been made aware of the matter. Here’s the exact words:

It’s been about six months, but the battery drain issue that Pie brought along for Pixel/Pixel 2 continues to bother users and is still being discussed.